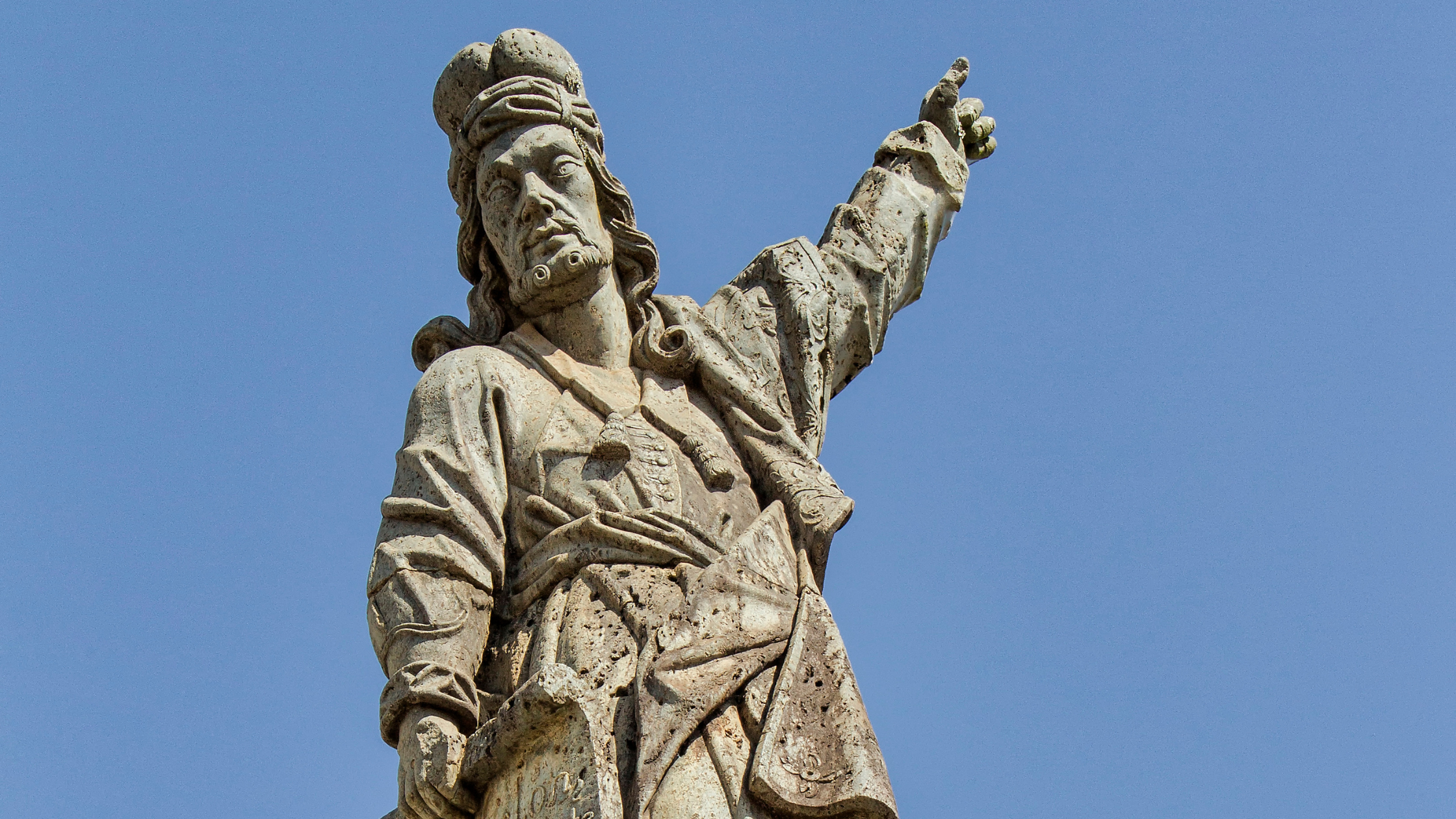 Romans 1:17 in Greek reads: δικαιοσύνη γὰρ θεοῦ ἐν αὐτῷ ἀποκαλύπτεται ἐκ πίστεως εἰς πίστιν, καθὼς γέγραπται· ὁ δὲ δίκαιος ἐκ πίστεως ζήσεται.
'For the righteousness of God is revealed in it from the faith for the faith, as it is written: the righteous from the faith will live.'
Almost every verse in Romans is hotly debated, but this one is one of the few in Romans where just about every word is contested. The phrase ‘righteousness of God’ has, of course, received a lot of airtime, and then there is the very condense ἐκ πίστεως εἰς πίστιν, usually woodenly translated ‘from faith for faith’ (so the ESV) or opaquely translated ‘by faith from first to last’ (so the NIV).

Before I knew Greek, I still remember being puzzled by the terseness of this language as it was translated into English. I had no idea what it would mean for the righteousness of God to be revealed ‘from faith for faith’ or ‘by faith from first to last,’ and it certainly wasn’t clear to me how this was connected to the quote from Habakkuk 2:4.

As shown by my translation, we will suggest a different understanding of the noun πίστις in this verse, one that makes sense of both the odd phrase ἐκ πίστεως εἰς πίστιν and the Habakkuk quote. But let’s start our discussion with Origen who wrote the first full-length commentary on Romans and who happens to be a native speaker of Greek.

Origen and the meaning of  πίστις

Origen often gets a bad rap for allegorizing the text too much. While he does indeed do so at times, he certainly does not always do so. His commentary on Romans, for example, is full of simple exegesis—trying to figure out what the words mean. What makes his perspective valuable is the fact that he is a native speaker of Greek. This certainly does not mean he is an infallible interpreter, but it certainly does mean that he had far better intuitions than we do about how to understand the Greek text that we have from Paul.

So how did he understand the phrase ἐκ πίστεως εἰς πίστιν? Origen says, "Concerning ἐκ πίστεως εἰς πίστιν, we have already said that the first people were in the faith, because they believed God and Moses his servant, from which faith they have now gone over to the faith of the gospel." In other words, Origen interprets ἐκ πίστεως as 'from the faith as it was in the days of Moses,' and εἰς πίστιν as 'the faith of the gospel.' In both cases, he understands πίστις to refer to something that in English is best approximated by the gloss "the faith," or a system of belief and practice that one adopts. This, we will argue, is the best interpretation of the noun πίστις, even though we will tweak Origen's understanding of how πίστις is related to the prepositions.

The meaning of πίστις at the time of Paul

Although this meaning is listed in a standard dictionary like BDAG, it has been called into question in recent scholarship on the noun πίστις. Teresa Morgan's book, Roman Faith and Christian Faith, has been lauded as a "significant and magisterial study" and rightfully so. It is full of many valuable insights about how the word πίστις was used in the ancient world. For more on her work, you can check out our podcast episode The Meaning of πίστις (faith) in Paul with Teresa Morgan. While Morgan's work is a must-read, we do disagree on one significant point. Morgan suggests that this meaning of πίστις to refer to 'the faith' was absent at the time of Paul. Origen's understanding, she would maintain, is not an accurate reflection of what Paul meant but is a retrojection of what the term πίστις later came to mean. However, there are two reasons why this is probably not the case.
First, BDAG lists an example of the noun πίστις meaning 'the faith' from the first century BC from Diodorus Siculus's "Library of History." The use of πίστις occurs at the end of a section explaining the ancestry of Osiris, originally an Egyptian god, as a Greek god. Osiris is then identified as Dionysus. At the beginning of the story, the priests of Osiris claim that such a story was merely invented, even though it became very popular. Eventually, it says that even the theaters were filled with such a story, καὶ τοῖς ἐπιγινομένοις ἰσχρυρὰν πίστιν καὶ ἀμετάθετον γενέσθαι 'and to those who came after, the belief became strong and immutable.' In other words, the noun πίστις here refers to the 'belief' or 'faith' itself and not to the state of believing or having faith. This is exactly the kind of meaning that Origen gives to πίστις in his commentary on Romans 1:17, and the fact that it is found before Paul's time means that it would have been available to him to use as well.
The second reason why this meaning of πίστις was almost certainly operative during Paul's time is the nature of the noun itself. In her work, Morgan calls πίστις an action nominal, and I call πίστις a deverbal noun in my article "A Linguistic Analysis of πίστις χριστοῦ: The Case for the Third View", where I discuss these kinds of noun at length. Both "action nominal" and "deverbal noun" essentially refer to the same thing in linguistics, and one of the classic examples in English is the noun destruction. This noun can be used like its verbal counterpart, as we can see in the two parallel examples The brother destroyed the fort and The brother's destruction of the fort.

This is called the referential use of deverbal nouns. It is the use that refers to something that is connected to the event or state of the verb. For our noun πίστις, this use would refer to the thing believed or the thing someone has faith in--the kind of meaning we already said that Origen attributes to πίστις in Romans 1:17 and the kind of meaning we saw attested in Diodorus Siculus's work. This is also the meaning argued for in The Jesus-Christ-Faith: Galatians 3:22 and The Pistis Christou Debate.

So what happens when we interpret πίστις in Romans 1:17 as referring to 'the faith' as in the thing that someone has faith in? It actually makes the verse make a whole lot of sense. The righteousness of God is revealed from this faith ἐκ πίστεως. We will learn later in Romans that this faith is the Christ-faith, the message of Jesus as Messiah, so God's righteousness is revealed through the story of Jesus the Messiah. This makes perfect sense of both the immediate and larger context.

In the previous verse, the gospel is called the power of God for salvation, so it is made to be the means by which God brings about salvation in the world. A very similar function is given to 'the faith' here. It is the thing which reveals God's righteousness--without which no one can become righteous and no one could experience salvation. So 'the faith' and 'the gospel' play very similar roles in this context, suggesting that just as the power of God for salvation is revealed in the gospel, so the righteousness of God from the faith.
Now how do we understand the next phrase εἰς πίστιν 'for the faith?' This is where the Habakkuk quote comes in. The quote from Habakkuk says 'the righteous one from the faith will live.' So people are righteous by virtue of being a member of the Christ-faith. That's what it means to say 'the righteous one from the faith,' which is a scriptural proof-text for saying that the righteousness of God was revealed from the faith.