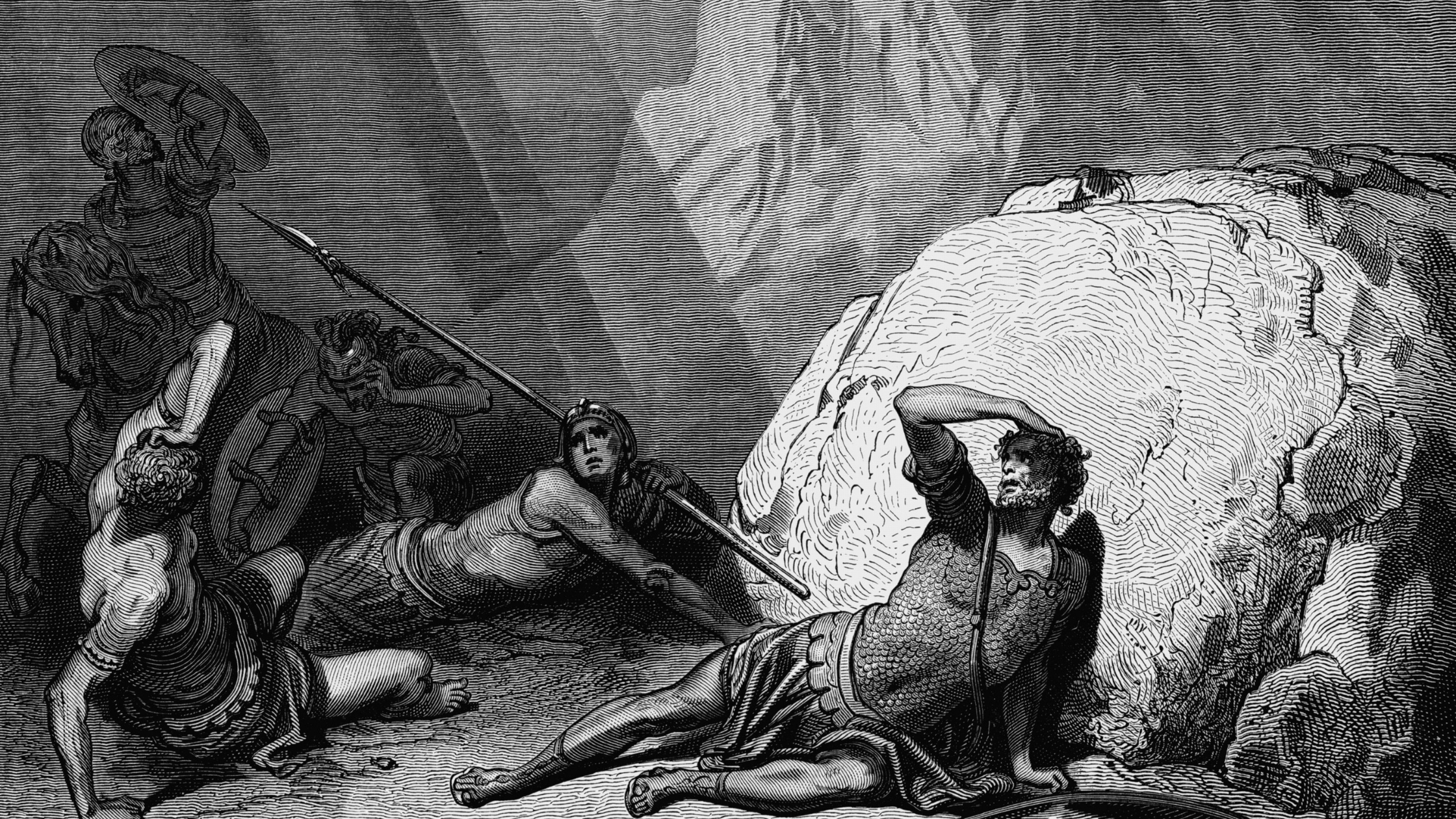 Galatians 3:22 in Greek reads: ἀλλὰ συνέκλεισεν ἡ γραφὴ τὰ πάντα ὑπὸ ἁμαρτίαν, ἵνα ἡ ἐπαγγελία ἐκ πίστεως Ἰησοῦ Χριστοῦ δοθῇ τοῖς πιστεύουσιν.
We can translate this as 'But the Scriptures shut up everything under sin, so that the promise from πίστεως Ἰησοῦ Χριστοῦ might be given to those who are faithful.'
The only phrase left untranslated in this sentence has led to a tremendous amount of scholarly sparring, which I myself have taken part in. It is the phrase ἐκ πίστεως Ἰησοῦ Χριστοῦ, and the debate is called the pistis Christou debate. It centers around how to understand the relationship between the words 'pistis,' usually translated 'faith' or 'faithfulness,' and 'Jesus Christ.'

Most translations translate this as 'faith in Jesus Christ.' This is called the objective genitive position. A significant portion of the scholarly world thinks it should be translated 'faithfulness of Jesus Christ.' This is called the subjective genitive position. In my own work, I have claimed that both of these understandings of the Greek are misguided, especially translating the phrase as 'faith in Jesus Christ' which is grammatically impossible.

For all the details, you can go to my article in the Journal for the Study of the New Testament. Here, I will give the reader's digest version and show why a third interpretation fits the grammar and context much better. My translation of the phrase is 'the Jesus-Christ faith,' where it is the faith about Jesus the Christ that is being referred to.

These don't mean the same thing. Saying Tom's belief in Mary is reasonable is not the same as Tom's belief of Mary is reasonable. The phrase belief in someone means that you believe someone has an ability to do something. The phrase belief of someone means that you believe something someone has said is true.

So that is the basic problem with the objective genitive position. What about the subjective genitive? Why shouldn't we understand the phrase as ' the faithfulness of Jesus Christ?'

There are two grammatical problems with this. First, it is unclear what Jesus Christ is faithful to in this context. Those who advocate for this interpretation do not say that Jesus has some abstract quality of faithfulness from which the promise comes, but that he is faithful to God's plan or to his death or something to that effect. The issue is that Paul never actually says what Jesus is faithful to in the seven times the phrase is used in his letters. Why wouldn't Paul just say that Jesus was faithful to God's plan if that is the meaning he was trying to convey? We would at least expect him to finish the phrase in one of the seven times he uses it, but he never does.

The second grammatical problem is the lack of the article on πίστις. The article in Greek is not the same as the article in English, but one of its characteristics is that it is normally present for nouns that refer to events or states, as πίστις should under the subjective genitive interpretation. We actually see this in the verse about having faith in Christ Jesus that we mentioned earlier. Verse 26 says διὰ τῆς πίστεως ἐν Χριστῷ Ἰησοῦ where the article is present with πίστεως when we should interpret it as a state. This is the norm for this meaning of the noun πίστις.

And this brings us to the third view. A dictionary like BDAG lists a possible meaning of πίστις as what someone believes or has faith in, but while they claim this meaning begins as early as Paul in the New Testament, only give a handful of references. This might be because this meaning is often associated with the article (so some expect ἡ πίστις for this meaning), but ironically, the article is not required for this meaning and is routinely absent when we compare πίστις to other similar nouns.

For example, we can look at another noun like ἀποκάλυψις. This noun can refer to the act of revealing or the thing revealed, just like πίστις can refer to the state of having faith or believing as well as the thing believed. There are clear examples where ἀποκάλυψις refers to the thing revealed without the article, even when the revelation is a unique revelation where the article would be required in English. So in Romans 16:25, Paul says κατὰ ἀποκάλυψιν μυστηρίου χρόνοις αἰωνίοις σεσιγημένου 'according to the revelation of the mystery that was kept secret for many ages.' Here, the 'revelation' being referred to is the thing revealed. It is the mystery itself. There is no article, even though the correct translation into English requires the definite article.

This is not to say that this meaning never occurs with the article. We see a clear example of this meaning of πίστις as 'the faith' in Galatians 1:23 where Paul's description of himself says 'the one who was formerly persecuting us is now preaching the faith (εὐαγγελίζεται τὴν πίστιν) which he was formerly trying to destroy.' While this meaning of πίστις is occasionally found with the article, it is routinely found without it, but the meaning advocated for by both the subjective and objective genitive positions almost always occurs with the article. Part of the reason for this is because bare singular nouns in Greek (without the article) are not the same as indefinite nouns in English (with the indefinite article 'a'), but that is another discussion.

So why should we interpret the noun πίστις as referring to 'the faith about Jesus Christ' or 'the Christ-faith' in this context? First, the promise spoken of comes from ἐκ the Christ-faith. This makes sense if the faith itself is a message that can be preached, which is exactly the meaning we saw in Galatians 1:23. In other words, the promise is part of the message of the faith.

Second, the next verse necessitates that we interpret 'faith' as a thing and not as a state, as both the subjective and objective genitive positions must maintain. This is because the 'faith' is said to come where it says in Greek πρὸ τοῦ δὲ ἐλθεῖν τὴν πίστιν ὑπὸ νόμον ἐφρουρούμεθα 'before the faith came, we were detained by the law.' It makes no sense to say this is anyone's faith or faithfulness, whether ours or the Messiah's. The clause says that the faith was revealed. Again, this cannot be said of a state, such as us being faithful to the messiah or the messiah being faithful to God's plan.

Because πίστις must refer to 'the faith' in verse 23, it strongly suggests that 'the faith' is being referred to in verse 22, particularly because both references to 'faith' have the same relationship to the context. There was a time before the faith came when the Scriptures or the law imprisoned everyone, but the revelation of the faith releases those who believe from that position.

Now comes the big question: who cares? How does this third view interpretation help us to understand what Paul is saying? In this interpretation, the 'Christ-faith' refers to something that can be preached and adopted. So what was actually being "preached?" This is given by the genitive: Jesus Christ, or Jesus the Messiah.

This interpretation highlights Jesus' messiahship as the central message of Paul. In fact, after saying that the Torah detained people until the faith comes in verse 23, Paul immediately says that the Torah was a tutor or guardian until the Messiah came in verse 24. In other words, the coming of the faith and the coming of the Messiah are in parallel in verses 23 and 24.